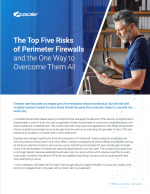 In this whitepaper, we’ll detail the five major risks brought about by legacy firewalls in a cloud and mobile world and how to relegate them to the past with a modern zero trust approach.

IBM Security and Ponemon Institute are pleased to release...
Download

Regardless of the industry, data drives today’s enterprise. The...
Download

Doing Nothing Could Mean Losing Everything

Explore the infographic below to better understand the threat landscape, and what you can do to protect your business. To learn more please download this...

Every day, organizations move more applications, infrastructure and data into the cloud. The number of endpoints accessing them is exploding. An endpoint is any...

Recognized and renowned by millions, the Mary Kay brand sells its beauty products in over 40 countries, making it a global business. With this...

As an expanding organization working nationwide to effect change, Code. org began to experience growing pains. In addition to staff turnover, as the organization...

Enabling the Future of Work with EPM, Identity and Access Controls

The IDC survey revealed that 83% of data breaches resulted from an identity compromise, like phishing. Organizations can stop data breaches by adopting identity...

Password management provides the simplified workflow that employees crave without sacrificing security or control. It is a foundational tool to protect your company from...

This report sets out to create a detailed picture of the current security landscape: to understand the unique mindset and priorities that security decision...

TechProspect takes pride in its content library which is a comprehensive source of the finest white papers and research reports provided by eminent corporations. It allows key decision makers to analyze and compare products and services, thus drawing an extremely qualified set of users across a diverse range of domains. We also partner with companies around the globe to access the best resources and technology to be able to deliver what we promise.

PowerStore is architected to eliminate the typical tradeoffs in...

The concept of artificial intelligence (AI) has been with...